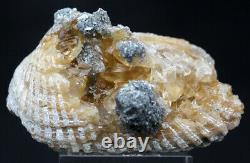 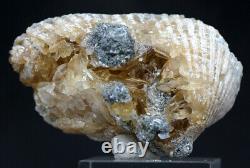 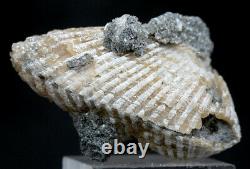 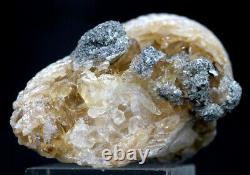 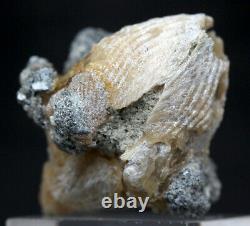 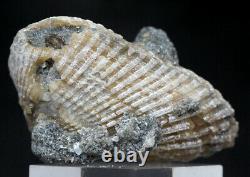 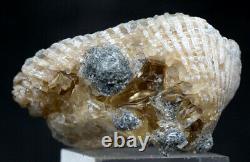 This specimen weighs 27.64 grams. It measures 44 mm x 29 mm x 27 mm. Auctions you win are added to your cart automatically. I bought it at a gem show in Arizona and it was found in Rucks Pit, Fort Drum, Florida.

This is the only place in the world where these specimens can be found! What makes this specimen so spectacular is that the calcite crystals have formed INSIDE a shell fossil!

It's similar to a geode except that with a geode the crystals form inside a cavity within the surrounding rock that was created by a volcanic gas bubble. In the case of this specimen the cavity was created when the remains of the mollusk decomposed leaving a void. It would be a great idea to have in a classroom for a teacher, or to have as a part of a gem and mineral and fossil collection. It's really interesting and I hope it finds a good home out there. The following is a wikipedia entry about the specimen.

From Wikipedia, the free encyclopedia. Jump to navigationJump to search.

This article is about the community in Okeechobee County, Florida. For other places with a similar name, see Fort Drum (disambiguation).

Calcite crystals in fossilized clamshell, only known location to be found is in Fort Drum. Fort Drum was a town in Okeechobee County, Florida, United States, located on US 441, between Yeehaw Junction and Okeechobee. A service plaza on Florida's Turnpike is named after the town.

The Fort Drum Wildlife Management Area consists of nearly 21,000 acres in southwestern Indian River County and is named for its proximity to the town and is known as the birthplace of the St. Fort Drum is the only known locale for crystal bearing fossil shells. There is a cemetery in the middle of the town on almost eight acres, in which many of the first settlers of Fort Drum were buried and still remain.

In the Pliocene and Pleistocene it was underlain by the now-smaller Lake Okeechobee. Vast limestone deposits containing the remains of large bivalve molluscs developed calcite crystallization while still under water. The gemlike crystals were discovered after the hard limestone deposits came to be excavated for aggregate.

In 2008 the quarry known as Ruck's Pit was closed and allowed to flood. After the end of the Second Seminole War in 1842, the US Army built a network of forts across the central part of the state, with military roads that connected them. Of those roads, one was roughly eastwest from Fort Bassinger to Fort Vinton, north of present-day Vero Beach. The other ran approximately northsouth from Fort Kissimmee to Fort Jupiter, and came to be known as the'old wire road'.

Where the two roads crossed, Fort Drum was built. The US Army used it only for a short time and then abandoned it. Settlers began to make their way here in the 1870s, some time after the Civil War. The area was considered to be potentially excellent cattle country. With the completion in 1914 of the Kissimmee Valley Extension, the Florida East Coast Railroad brought changes to the area. They built a small depot in Fort Drum, as well as one to the north, named Osawaw, and south, called Hilolo. The item "CALCITE FOSSIL CLAM Dogtooth Crystal Cluster Mineral Specimen FLORIDA" is in sale since Wednesday, March 11, 2020. This item is in the category "Collectibles\Rocks, Fossils & Minerals\Crystals & Mineral Specimens\Crystals". The seller is "callistodesigns" and is located in Tucson, Arizona. This item can be shipped worldwide.