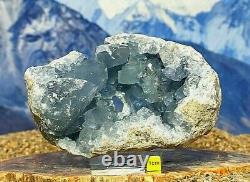 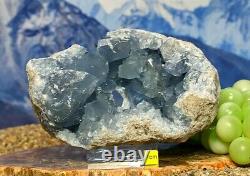 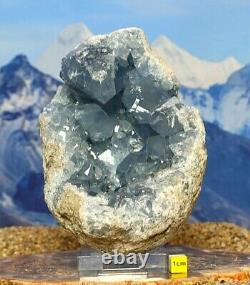 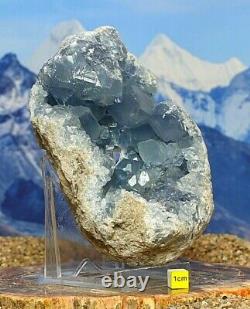 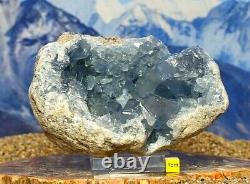 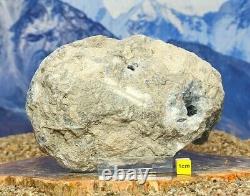 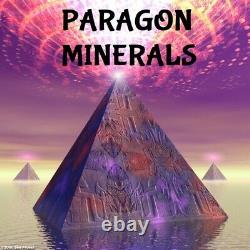 Spectacular Mineral & Crystal Suppliers. Celestite / Celestine Crystal Geode. 149mm x 100mm x 76mm WEIGHT: 1616g / 3.56lbs STAND INCLUDED? THIS SPECTACULAR SPECIMEN IS OFFERED AT AN UNBELIEVABLY LOW PRICE - AND WE HAVE ONLY ONE LIKE IT.

Absolutely superb, crystal cluster of Celestine weighing a large 1616g with large, beautiful, ice blue, crystals and next to no matrix. This fabulous sample comes from Madagascar , where all the best Celestite comes from. As you will see this specimen sits perfectly in either landscape or portrait orientation and of course, comes with one of our complimentary deluxe mineral stands. Just as it came out of the ground!!

We have included a 1cm square yellow cube in the photographs along with a bunch of grapes to give you an idea of how large this fabulous item is. A LITTLE INFORMATION ABOUT RAINBOW CELESTITE / CELESTINE.

Celestite, also known as Celestine, is a mineral composed of strontium sulphate (SrSO4). Its name is derived from Latin word Caelestis, meaning "celestial", which was inspired by the crystals well-known shades of sky blue. This mineral can occur in geodes as crystals. Celestite can also occur as fibres in sedimentary rock: river, streams, and ocean beds. The crystals are also often found growing alongside Gypsum, Anhydrite and Halite.

Celestite is found worldwide in small quantities. The pale blue specimens that the name is derived from are found in Madagascar and Sicily, Italy. It can also occur as colourless, white, pale blue, pink, pale green, pale brown, and black. Orange specimens have been found in Ontario, Canada. Other interesting names for the mineral include Coelestine, Eschwegite & Sicilianite. METAPHYSICAL / CRYSTAL HEALING PROPERTIES OF CELESTITE / CELESTINE. Celestite is a popular stone for easing stress and worry, bringing about inner peace and calmness. It can sharpen mental faculties and promote clarity of ideas. Some have stated that placing celestite in each room in your house or office can help lighten the mood of a space. Celestite can also help dispel grief or sadness. It helps neutralise the drive towards self-destruction and promotes a harmonious soft energy. It supports creativity and memory. Some report that celestite is the most widely used stone for use in communicating with angelic spirits.

Use celestite as a dream stone by keeping it under your pillow, as it will help you retain your memory of your dreams. Please do not leave your celestite in the sun, as this will discolour it. The item "Celestite Celestine Crystal Cluster Geode Raw Mineral Healing 1616g" is in sale since Saturday, March 20, 2021.

This item is in the category "Collectables\Rocks, Fossils & Minerals\Crystals". The seller is "paragonminerals" and is located in Edinburgh.