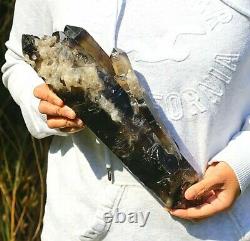 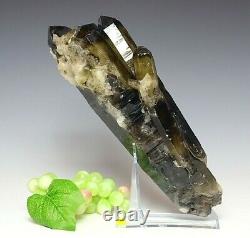 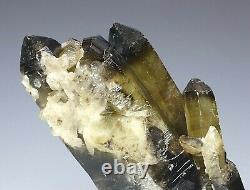 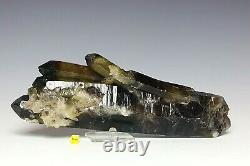 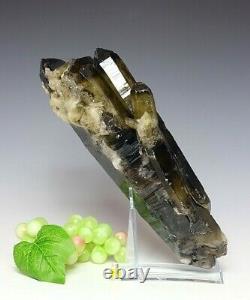 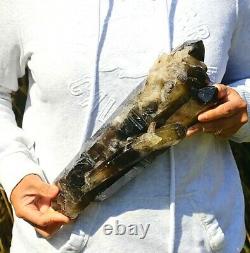 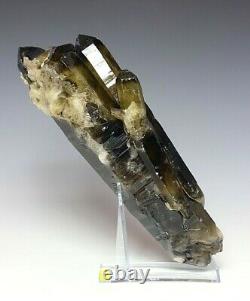 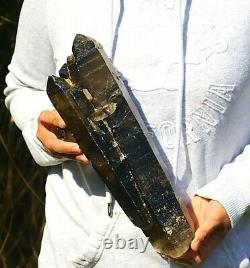 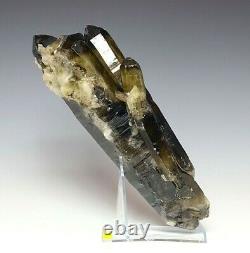 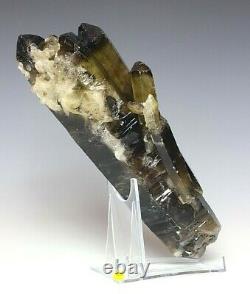 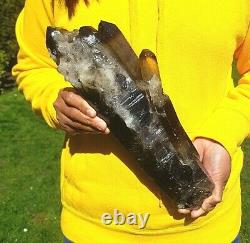 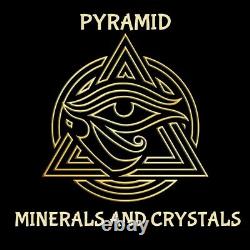 WEIGHT: 2842g / 6.27 lbs. THIS SPECTACULAR SPECIMEN IS OFFERED AT AN UNBELIEVABLY LOW PRICE - AND WE HAVE ONLY ONE LIKE IT. COMBINED BLACK & CITRINE HIMALAYAN ROCK CRYSTAL QUARTZ SIMPLY DOES NOT GET ANY BETTER THAN THIS!

This listing is for an outstanding, incredibly rare and huge group of combined smoky / black quartz and natural citrine quartz points from the highly spiritual Nepalese Himalayas. This amazing group comprises of 4 large and well formed points with Lemurian striations. We must stress that this magnificent group is 100% natural and just as it was found in the Himalayas. You will see from the photographs that the roots / base of the massive crystals start as dark smoky / black quartz before transitioning to NATURAL lemon citrine quartz, before transitioning again to dark smoky quartz terminated points.

This is the true colour of NATURAL Himalayan citrine quartz as opposed to the screaming orange, artificially heat treated citrine which pervades the market these days. The top of the points on one side, also has some milky quartz in massive form, which contrasts wonderfully with the near black main crystals.

We managed to acquire this amazing specimen when we were in Nepal, collecting chlorite laser quartz crystals at an altitude of over 4000 feet. I have NEVER seen combined smoky and citrine crystals this big and know that it's worth far, far more than we are asking. Grab it quick as it won't be around long!

We have photographed a small, yellow 1cm square cube along with a bunch of grapes in some of the photographs just to illustrate what a great size this spectacular specimen is. If you are looking for an amazing display piece or a magnificent crystal healing group of huge points, you just won't find better than this. This crystal group sits perfectly well without the need for a stand but we will provide you with a luxury, acrylic stand TOTALLY FREE , just in case you prefer one. A LITTLE INFORMATION ABOUT HIMALAYAN QUARTZ. Clear Quartz, pure silicon dioxide, is also called Rock Crystal or Ice Crystal, from the Greek word.

Meaning "ice", because crystal was believed to be water frozen so hard it could never thaw. The prismatic hexagonal crystals have relatively smooth sides and naturally faceted terminations at one or both ends, and may be transparent as glass, milky or striated, often found in clusters and ranging in all sizes. The terminations have different facet shapes depending on the rate at which they were formed, and these shapes are deeply significant. Formed in the beautiful Himalayan Mountains of Nepal, these marvellous Clear Quartz clusters are true survivors. Their journey is extraordinary, as they were meant to find their way to you. As beacons of light and positive energy, they can bring you hope and healing, aid in your struggles of survival, and help to explore your thread of connection to humanity. Use them in your daily thoughts, feelings, words and actions, and integrate their compassion into the world. METAPHYSICAL / CRYSTAL HEALING PROPERTIES OF HIMALAYAN QUARTZ: Himalayan Quartz carries the purest spiritual energy on the planet, and crystals from Nepal are known for their amazing clarity, brightness and sparkle. Most of the clusters offered here are remarkably ice water clear. They are the supreme gifts of Mother Earth, and even the smallest is imbued with the properties of a master healer teacher. Ancients believed Clear Quartz to be alive, taking a breath once every hundred years or so, and many cultures thought them to be incarnations of the Divine. Wearing, carrying or meditating with a Clear Quartz crystal opens the mind and heart to higher guidance, allowing the realm of Spirit to be transmitted and translated into the world of physical form. Resonating at the level of an individual's needs. Clear Quartz also amplifies whatever energy or intent is programmed into it, and continues to broadcast that energy throughout the world and into the etheric realms. This may accelerate the fulfilment of one's prayers, intensify healing or spiritual growth, or simply allow the crystal to hold a pattern of energy long enough and strongly enough for the manifestation of a goal to occur. Ordinary yet extraordinary, colourful and clear, Quartz crystals are the most common and abundant in the world, comprising the largest and most diverse family in the mineral kingdom. From ancient times to the present day, quartz crystals have been a source of light to mankind. Highly valued by spiritual leaders and healers as well as scientists, the unique attributes of quartz have played a key role in mankind's evolutionary development. The image shows the ACTUAL SPECIMEN you will receive unless otherwise stated. We only sell the finest minerals, crystals & fossils. Please remember this when comparing our specimens with others. Please also check the sizes of competitors' specimens. Many photograph their specimens to appear much larger than they actually are, resulting in disappointment.

We usually include a 1cm cube in at least one of the photographs to give a sense of scale. All our minerals, crystals & fossils are ethically sourced and are 100% natural specimens just as they come out of the ground. We NEVER sell altered, embellished, dyed or artificially enhanced specimens, such as screaming fluorescent agates,'day glow' dyed amethysts or'aura' vapour coated crystals. We're here to help.